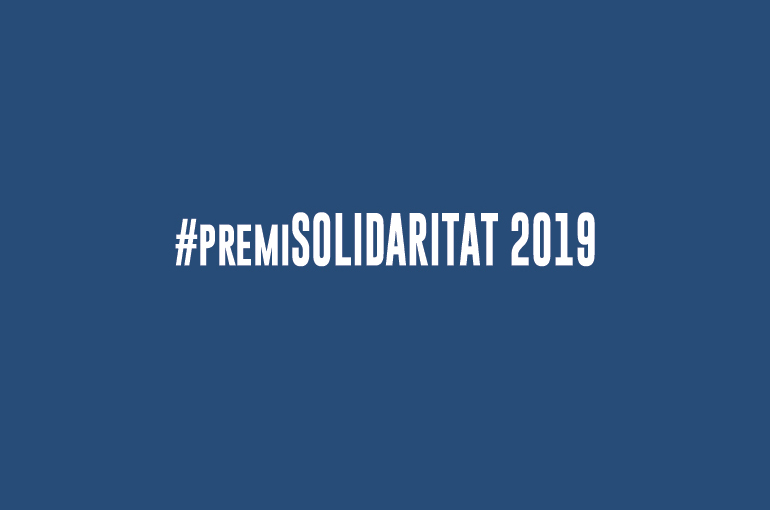 2019 has been full of awards and recognitions and, to end the year, we have been awarded the Solidarity Prize 2019, which has been awarded since 1987 by the Human Rights Institute of Catalonia (IDHC).

Of the 20 nominations submitted, the award panel (made up of representatives of human rights organisations and activists) wanted to recognise the solidarity work carried out by Xamfrà in favour of coexistence and social cohesion, vindicating diversity through cultural expressions.

Xamfrà’s music, theatre and dance workshops are today a point of reference for community action in the Raval neighbourhood. Its educational activities have been extended to other parts of the city of Barcelona.

The centre, set up in 2004 by the L’ARC Música Foundation, is a non-segregated space for relationships and coexistence where children, young people and adults at risk of social exclusion share a space of mutual knowledge and trust with their neighbours. Moreover, by defending cultural diversity and participation in the community, they make their rights as citizens effective.

According to David Bondia, president of the Human Rights Institute of Catalonia, “at a time when certain people and groups that are especially vulnerable are being criminalised, and also solidarity towards them, Xamfrà is clearly committed to recovering the values inherent to human rights in the construction of spaces for coexistence; spaces where everyone, with a focus on strengths, participates in the destruction of visible and invisible walls that fragment our social fabric and can thus reverse policies and practices that promote discrimination and inequality”.

Besides that, the Sant Vicenç de Sarrià Cultural Centre Association decided to award the JovEmprèn Prize (aimed at entrepreneurial ideas led by young people) to three entities. The association increased the endowment and shared the first prize among the three.

The winners of the 2019 edition were La Transversal Cultura, Asociación Synago and Xamfrà.

Congratulations to all of them!

© 2019 Designed and developed by Pixel hosting by

This website uses cookies to improve your experience while you navigate through the website. Out of these cookies, the cookies that are categorized as necessary are stored on your browser as they are essential for the working of basic functionalities of the website. We also use third-party cookies that help us analyze and understand how you use this website. These cookies will be stored in your browser only with your consent. You also have the option to opt-out of these cookies. But opting out of some of these cookies may have an effect on your browsing experience.
Necessary Always Enabled
Necessary cookies are absolutely essential for the website to function properly. This category only includes cookies that ensures basic functionalities and security features of the website. These cookies do not store any personal information.
Non-necessary
Any cookies that may not be particularly necessary for the website to function and is used specifically to collect user personal data via analytics, ads, other embedded contents are termed as non-necessary cookies. It is mandatory to procure user consent prior to running these cookies on your website.
SAVE & ACCEPT