A meeting place where we work to guarantee the fulfilment of the universal right to artistic practice.

Because we do not want to live in a segregated society in spaces that are impervious to each other, and where inequality in access to opportunities places many people at risk of exclusion.

Because the impermeability between social groups creates a map of defined borders, contact between which may create indifference, mistrust and even violence.

Because the universal declarations of human and cultural rights identify access to continued artistic and cultural practice as a necessary right to guarantee the dignity of all people. 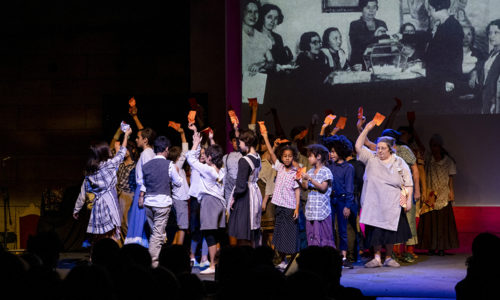 To welcome everyone, to generate processes of communal cultural development, to create training and employment opportunities for young people, to contribute to moving away from social situations of violence and indifference, creating conditions and climates that evolve towards coexistence.

To guarantee the fulfilment of the universal right to artistic practice.

People of all ages, in different situations and conditions who want to participate in artistic activities, with special attention to the mobilisation and motivation of the most vulnerable people.

In a society where the prevailing culture is that of individualism, selfishness, isolation and mistrust, at Xamfrà we are determined to generate a society where values are generosity, commitment, permeability, trust and cooperation.

In order to be a driving force that generates communal cultural development, we need to be aware of all the opportunities that come our way, to promote co-participation and collaboration between people, entities and institutions.

Creating shared artistic spaces, including all types of audiences, providing educational accompaniment, networking... and much more.

Facilitating and promoting access to artistic practice for people of all ages, with special attention to people and groups at risk of social exclusion.

Committing ourselves to the educational and artistic accompaniment of children, young people and families, with special attention to those at risk of social exclusion.

Weaving networks together at all levels because we understand networking as an attitude, a continuum of proactivity to generate opportunities for participation and collaboration.

Providing guidance to initiatives that want to work towards social and educational equity through artistic practices.

Advancing in social co-responsibility to make the initiatives that guarantee access to artistic practice for everyone sustainable.

Xamfrà was founded in 2004 by l'ARC Taller de Música Fundació Privada, with the support of two foundations (Avina and Levi's), running workshops at the Institut Miquel Tarradell. The course starts with 16 participants and ends with 42.

The number of students enrolled exceeds 130 and Xamfrà receives the 3rd Federico Mayor Zaragoza Prize from the Friends of UNESCO, as an example of good experiences of coexistence between cultures. The entities that participate in Xamfrà also diversify: Salvador Gavina Centre, Raval Social Foundation and Franja Joves.

There are now more than 170 students. We incorporate workshops with the Escó Foundation: music with mothers and babies and a women's choir.

We start a new singing and music workshop for young people. Xamfrà receives the National Education Award for projects of entities for the promotion of education, awarded by the Ministry of Education. Xamfrà participates in the Punto y Raya Junior Festival. We start up El Teler de Música, a social entrepreneurship initiative to promote and make music and community projects sustainable. It is a space for didactic resources and shared reflection for education professionals who use music as a pedagogical tool.

Xamfrà receives the Francesc Candel Prize (from the Carulla Foundation) and Ester Bonal, director, receives the Civic Action and Citizenship Prize, awarded by the same foundation. The orchestra workshop begins on Thursdays with cello, violin and clarinet students. A choreography and movement workshop for young people starts on Fridays.

We begin to run workshops during school hours at the Pere Vila School (music and movement in kindergarten, and orchestral ensemble in 4th, 5th and 6th grades) and after school hours at the Cal Maiol School (music and movement in kindergarten and ukulele in the initial cycle). At the same time, we coordinate the Educart pel Desenvolupament workshops at the Institut Miquel Tarradell, at the Mediterrània School and at the Mestre Morera School.

The Resist'art project wins the 25th November 2018 award for the prevention of gender violence, organised by Barcelona City Council. Resist'art becomes an integral project, made jointly with the group Las Anónimas, and in collaboration with various associations and entities of the neighbourhood and the city (Androna Cultura, Guné Foundation, Lloc de la dona, Diàlegs de dona, Escó Foundation...).

Enrolments have already exceeded 100 participants. The diversity of countries of origin of the participants, and workshops on offer, increase.

Xamfrà continues to grow and the number of registered members now exceeds 150. We inaugurate the premises in Carrer de les Tàpies (current location). Xamfrà is part of the Social Commission and the Culture Commission of the Tot Raval Foundation, which organises and boosts several projects linked to the neighbourhood and the District: participation in the Reading Network, Education Commission, Tot Raval Community and The Experts Project. Xamfrà is also a member of the Auditori Apropa programme of the Barcelona Auditorium.

More than 200 students are enrolled. We incorporate new workshops: traditional violin and ‘tarota’. The ‘Colla’ is formed with accordions, ‘flabiols’, tambourines, ‘tarotas’ and violins. We add a new workshop, carried out in collaboration with the Hospitalitat Foundation, for adults with intellectual disabilities. We participate in the project Cantamos el Mesías (La Caixa and Orquesta Sinfónica del Vallés) at the Palau de la Música and in the project Et Toca a TU (with the OBC) at the Auditori, together with the project Barrios en Solfa in Badalona Sur. La Colla de Xamfrà (a music and dance group for children and young people from the Raval neighbourhood of Barcelona) takes part in the St. Antoni and St. Jordi Festivals in the Raval.

The number of students continues to rise and now exceeds 300. Xamfrà is recognised with the Marta Mata Award (from the Rosa Sensat Association) and the Tatiana Sisquella Award (from Diari Ara). Cello workshops start in groups of three students, and a new improvisation workshop for young people also starts.

We start the Basket Beat workshop. We continue to work with our links with open centres in order to respond to the needs of their children and youth groups. Xamfrà coordinates the Educart workshops in Raval, Barceloneta and Ciutat Meridiana, as well as the theatre and emotions workshops in La Salut-Llefià in Badalona. Curricular diversification workshops continue at IES Miquel Tarradell and choir workshops at the Milà i Fontanals School.

The course begins with more than 450 participants in Xamfrà and, combining our intervention in the city, this figure expands to more than 800. Work begins with the foundations Sant Joan de Déu, Arrels, Diàlegs de Dona and Quatre Vents. We start a workshop with 3-year-old children and their families in the classroom. El Teler de Música, a social entrepreneurship project to help make Xamfrà sustainable and to contribute to the continuous training of music teachers, closes its financial year with a small profit, being sustainable for the first time. We coordinate, together with the Theatre Institute, a postgraduate course in social action and performing arts. L’'ARC Taller de Música Foundation wins the public tender to coordinate the EducArtS project in the neighbourhoods of Barcelona's Zona Nord.

We renew Xamfrà's graphic image and launch a new website. Xamfrà receives the Alícia prize in its reference as a Social Project, awarded by the Catalan Academy of Music. It also receives the JovEmrèn prize, awarded by the Sant Vicenç de Sarrià Cultural Centre Association, as an entrepreneurial idea led by young people. Finally, Xamfrà receives the Solidarity Prize 2019, awarded since 1987 by the Human Rights Institute of Catalonia for the solidarity work carried out by Xamfrà in favour of coexistence and social cohesion, vindicating diversity through cultural expressions. Xamfrà, along with other entities in Spain, receives the 1st Solidarity Challenge Award from the Botín Foundation for the IncluARTE project, a project for the inclusion and empowerment of children through art.

Can you help us to achieve the universal right to artistic practice?

© 2019 Designed and developed by Pixel hosting by

This website uses cookies to improve your experience while you navigate through the website. Out of these cookies, the cookies that are categorized as necessary are stored on your browser as they are essential for the working of basic functionalities of the website. We also use third-party cookies that help us analyze and understand how you use this website. These cookies will be stored in your browser only with your consent. You also have the option to opt-out of these cookies. But opting out of some of these cookies may have an effect on your browsing experience.
Necessary Always Enabled
Necessary cookies are absolutely essential for the website to function properly. This category only includes cookies that ensures basic functionalities and security features of the website. These cookies do not store any personal information.
Non-necessary
Any cookies that may not be particularly necessary for the website to function and is used specifically to collect user personal data via analytics, ads, other embedded contents are termed as non-necessary cookies. It is mandatory to procure user consent prior to running these cookies on your website.
SAVE & ACCEPT